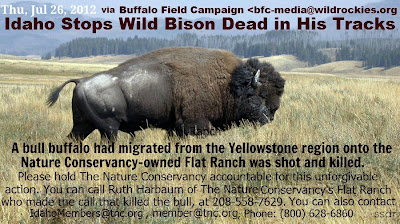 Buffalo Field Campaign is the only group working in the field
and in the policy arena to protect America's last wild buffalo.
27 BISON, INCLUDING NEWBORNS, CAPTURED NEAR YELLOWSTONE

WEST YELLOWSTONE, MONTANA:  27 wild American buffalo (bison), members of America's only continuously wild population, were captured this morning near West Yellowstone.  The operation was led by the Montana Department of Livestock (MDOL) and took place at the MDOL's Duck Creek bison trap, located on private land adjacent to the western edge of Yellowstone National Park.  12 newborn calves, 12 mothers, and three two-year-olds were relocated in the operation.

Other state and federal agencies participating in todays capture operation include the Montana Department of Fish, Wildlife, and Parks (MFWP), the National Park Service, the US Department of Agriculture Animal and Plant Health Inspection Service (APHIS), and the Gallatin County Sheriffs Office.

The buffalo were sorted by age inside the trap--with newborns being separated from their mothers--loaded onto livestock trailers, transported into Yellowstone National Park, and released at Fountain Flats early this afternoon.  It is unknown whether any animals suffered injuries as a result of confinement and transportation.

The agencies have been engaged in intensive hazing here for the past six weeks, incessantly chasing bison at the height of calving season.

"While we hail the decision not to slaughter these animals, we are deeply disappointed in Montanas stubborn refusal to let wild bison be wild bison," said Buffalo Field Campaign's Executive Director Dan Brister, "How long will we treat our last wild bison like livestock, separate newborn calves form their mothers, and allow the Department of Livestock to dictate their fate?"

Buffalo Field Campaign is a non-profit public interest organization founded in 1997 to stop the harassment and slaughter of Americas last wild bison populations that inhabit the Yellowstone region, protect the natural habitat of wild free-roaming bison and other native wildlife, and to work with people of all Nations to honor the sacredness of wild bison.

More information can be found at http://www.buffalofieldcampaign.org